[…] Kirk Guidry adds to our collection of "computer illiteracy" stories: "When I worked for the Department of Education, I would travel around the state doing technology training for teachers and administrators. While I was conducting a training in north Louisiana, a teacher raised her hand and said that a information box had appeared on her screen. Without missing a beat in my presentation, I told her to press any key and it would go away. After I gave them their assignment, she once again raised her hand, and said she could not find the 'any' key." […]

YAKIMA, Wash. - A Yakima woman posted a photo of toilet paper rolls with what look to be spots of blood to Facebook. The post has since been shared nearly 9,000 times. Nicole Medina said when she went into the bathroom at the West Valley Walmart, she noticed the toilet paper container was open and saw "red marks all over." She said she thinks it's from people shooting up in the stall and using the rolls of toilet paper to wipe clean their needles. […] 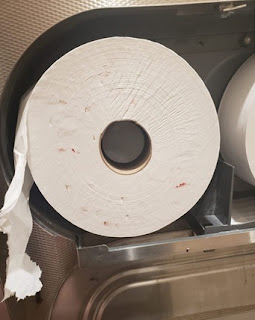 Myth vs History: A Study of Vietnam War Stories and Journalism

In 2007, I presented a paper on the myth of spat-on Vietnam veterans at a Queensland University conference in Brisbane, Australia. The paper drew on the history of homecomings experienced by U.S veterans of the war; it was well received by the attending historians, most of whom were Australians. In the Q&A that followed, however, assertions were made that the Australian case was different: Australian returnees, it was said, were met with great hostility and even acts of spitting by the antiwar movement. My surprise at hearing that claim was then surpassed by the acceptance of its merit by the roomful of scholars. With the unspoken certainty of something everyone-knows-is-true filling the room, the story of spat-on Australian veterans went unchallenged into the end of the session. […]

[The rest of the article is a favorable review of Mark Dapin’s Australia’s Vietnam: Myth vs. History (2019), which covers the spat-on veteran and other topics.]