A 'killer clown' has been harassing residents in Penryn over the weekend, chasing women and reportedly asking children to get in his car. Police confirmed reports of a man wearing a 'Pennywise' mask approaching two women and a seven-year-old in a wooded area near Green Lane on Saturday and chasing them when they ran away. […]

Swiss daily dilemmas: Can I flush my toilet at night?

One of the first things that strikes foreigners in Switzerland are the (sometimes very) long lists of rules governing life in apartment buildings in the country. […] But none of the above stops people from flushing a toilet at night. […] 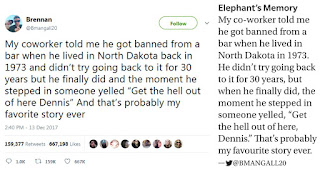 A top Hong Kong government adviser has been heavily criticized for spreading rumors after claiming she had confirmed a report of a girl offering free sex to frontline protesters. Executive councilor Fanny Law Fan Chiu-fan claimed that she had confirmed “a true case” on Radio Television Hong Kong’s program ‘Backchat’ on Monday after a listener’s email was read out by a program host. It alleged that some girls are being tasked with “providing comfort” to frontline protesters. […] A listener called into the program later, accusing Law of spreading rumors. But the councilor claimed she had evidence. “That is the daughter of a friend’s friend. That’s second-hand knowledge but it’s direct. It’s real.” […]

Girls misled to offer sex to HK protesters, urged to stay away from alcohol, marijuana

Hong Kong Executive Councilor Fanny Law Fan Chiu-fun told the Global Times on Monday that she had "trusted" sources to prove that young girls have been misled into offering free sex to frontline protesters. […]

A small gap in Hong Kong’s revolutionary repertoire was filled last week: sex stories. This is a universal feature of respectable revolutions, let alone disreputable ones: conservative observers are convinced that the revolutionaries are at it all the time, breaking the rules of sexual behaviour just as they break those of politics and law. […]

[…]  In the post, a woman claims she was approached by a woman in a minivan Sunday at Towne East Mall in east Wichita. She says the woman asked her to watch her baby, which she thought was odd. The woman reported this to a security officer at the mall. That information is all true, but police say more to this story is false. The woman claimed the officer told her it was part of human trafficking and that she could have been pulled inside the van. Wichita police say this last part never happened. […] 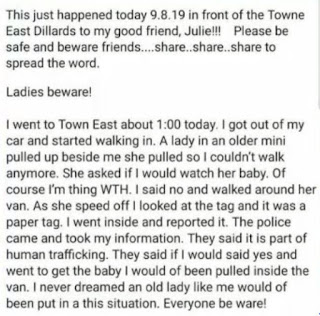