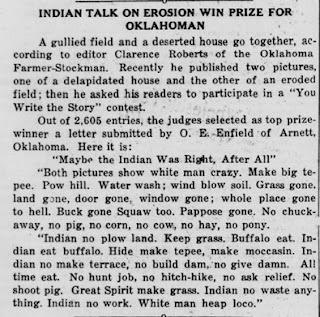 The writer of the winning contest entry, O. E. Enfield, was a county attorney in Arnett, Oklahoma. I don’t know his ethnicity. Some later iterations state the writer was “an Indian boy,” “a bright Indian lad,” “a Cherokee Indian,” or “an Oklahoma Indian, descended from a North Georgia Cherokee,” but the use of stereotypical “Injun English” marks it as inauthentic. The contest entry, sometimes incorrectly reported as having been written in the 1950s or 1960s, expresses an ecological message which has led to it being quoted in a few books on landscaping, e.g., George Tobey, A History of Landscape Architecture: The Relationship of People to Environment (1973); John L. Motloch, Introduction to Landscape Design, 2nd ed. (2001); and James D. Kornwolf, Architecture and Town Planning in Colonial North America, vol. 3 (2002).

Russ Pancoast, “Your Wildlife Reporter” (column excerpt). The Cuero (TX) Record, 8 August 1954, p. 2. “Recently a deserted farm house in a gullied field was pictured in a farm journal which offered a prize for the best 100-word description. An Indian took the prize with this: ‘Picture shows white man crazy.’” 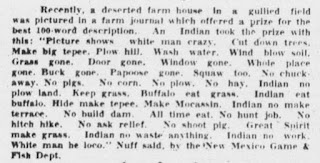 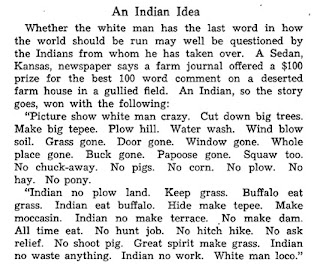 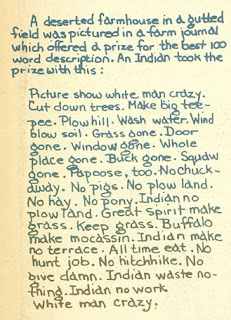 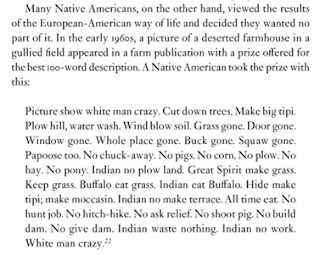