Eva Braun’s panties are the modern equivalent of slivers of the True Cross.

How Did Eva Braun’s Underwear End Up in an Ohio Thrift Store?

Prominently displayed in a long, narrow shop in Elmore, Ohio, is a glass case containing a pair of high-waisted, salmon-colored, lace-accented French silk panties. A raised monogram on the top spells “EB” and a price tag lists a “FIRM” $7,500. These are not just any French silk panties. If the accompanying description is to be believed, they once belonged to Hitler’s longtime mistress (and, briefly, wife), the notorious Eva Braun. […] 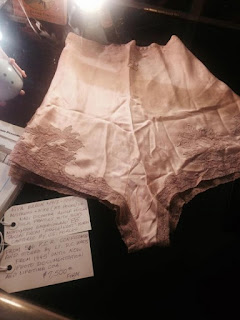 A PAIR of silk frilly knickers worn by Adolf Hitler's mistress Eva Braun for the Nazi dictator have sold for almost £3,500. The pair of lilac undies, that have Braun's monogrammed initials embroidered on the front of them, got pulses racing when they went up for auction. […] 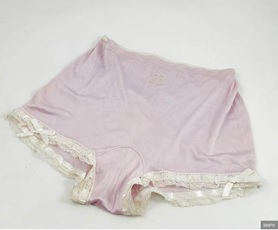 A pair of knickers belonging to Adolf Hitler's wife Eva Braun has sold at auction for £3,700. The pink silk pants embroidered with Braun's initials came from a private European World War Two collection. […] 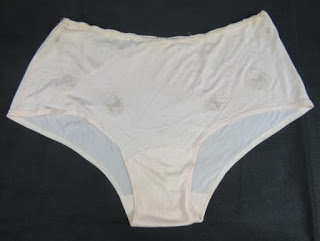 Charles Rodrigues, Gag on This (Seattle: Fantagraphics Books, 2015), 128. A cartoon that originally appeared in the National Lampoon. 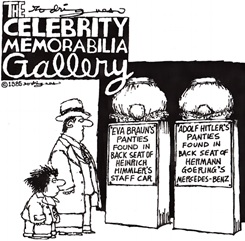 Posted by Brian Chapman at 10:58 AM
Labels: WWII