Rumours of child abduction gangs on the prowl have been circulating aggressively on social media and messaging platforms over the past two months. A variant of these rumours claims that these gangs are into the organ trafficking business, removing the internal organs of abducted children. An incendiary audio clip has been doing the rounds, the message delivered in Hindi[.] […]

A SCHOOLBOY was chased by a person dressed as a clown as he made his way to school, police have confirmed. The boy was riding his bike this morning when he was chased down a horse track near Selsmore Road on Hayling Island. […]

IPOH, Sept 6 — Universiti Pendidikan Sultan Idris (UPSI) has denied allegations that information regarding children who register for the Pintar Berbakat screening tests for the Junior Science Camp 2019 programme will be used for kidnapping purposes. […] 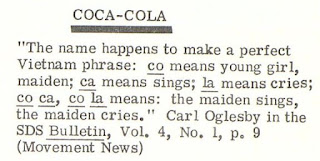 A final story: In a tiny one-room bar one hot night at the top of a beat-up hotel in the red-light part of Hue, a young man named Khiet told me why Coca-Cola has become the national drink of Vietnam. The name happens to make a perfect Vietnamese phrase: co means young girl, maiden; ca means sings; la means cries; co ca, co la means; the maiden sings, the maiden cries. A drink with such a name—I guess I'd drink it too.

=====
Junji Ito, “I Don’t Want To Be A Ghost,” Smashed (San Francisco: VIZ Media, 2019), 298, 301. This horror manga, from a collection of Junji Ito’s tales originally published in Japan in 2013, references the vanishing hitchhiker legend. In this story, however, the protagonist ends up wishing his flesh-and-blood passenger had vanished. Read from right to left.