CLEVELAND, Tenn. (WDEF) — Walmart is responding after a woman finds a razor blade underneath the handle bar of a shopping cart at a store in Cleveland. […] Experts say shoplifters sometimes do this as a way to remove tags from electronics. 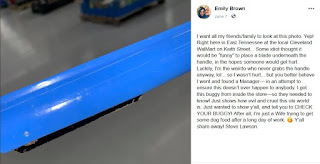 Deputy IGP: No truth to rumours of syndicates kidnapping children for organs

PETALING JAYA: Rumours that there are syndicates kidnapping children to harvest their organs are not true, says Datuk Mazlan Mansor.  The Deputy Inspector-General of Police said that the rumours are still floating around despite police issuing several statements denying it.  […]

A man in a clown mask is said to have left three young boys terrified after approaching them while they were playing in Penryn. Police were called just after 4pm to reports that the man had been spotted in some bushes at Penryn Football Club and he walked towards the 12-year-olds and even asked if they wanted to go home with him. […]