KHON KAEN: "Power cards" claimed to cure all illnesses have been sold to local residents in some areas of the northeastern province at up to 1,500 baht apiece. Sellers told customers that their pains would stop if they placed the cards on the spots. They also claimed other illnesses could be cured if users drank water stirred with a card or placed a cup on it first. Believers then had to pay 1,100-1,500 baht for each card. […] 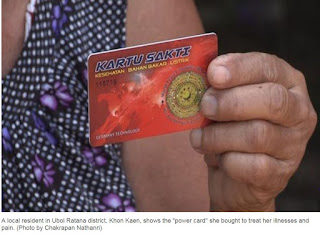 
A blason populaire about Tasmanians having two heads “is most likely to have come from the widespread cases of goitre in Tasmania throughout the 19th and 20th centuries.” A more fanciful explanation is that it “comes from World War I, when soldiers from the island state allegedly requested two pillows for their bunks instead of the usual one.”

What is the origin of the joke about Tasmanians having two heads?

Posted by Brian Chapman at 2:22 PM