'I thought it was a dog’, claims singer nabbed for taking sun bear home

KUALA LUMPUR, June 9 — A singer arrested keeping an endangered sun bear cub in her condominium unit asserted that she mistook the wild creature for a dog. […]

I thought I was rescuing a dog, but it turned out to be a bear, claims singer

PETALING JAYA: Singer Zarith Sofia Yasin told a Malay daily that she mistakenly thought that the bear she "rescued" was a dog. "It was night time when I found the bear cub in a weakened state by the side of the road – and I thought it was dog!" she told Kosmo! In a report published on Sunday (June 9). […]

What should’ve been a fun morning at the park turned into something akin to an urban legend for a Calgary family on Monday. The Webster family’s morning was flipped upside down after their 4½-year-old son was cut by razor blades wedged into a slide in a northeast park. Gillian Webster’s son, James, was at a park near 60th Avenue and Centre Street N.E. with his day-home group when he was sliced by the blades. […] 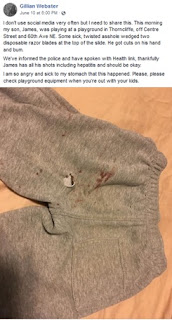 Gokwe: Some superstitious locals in this area known for some of the country’s most mysterious tales on witchcraft believe the dreaded traditional sex-locking method – runyoka or rukawo in Shona – on partners was contributing to the reported decline in new HIV prevalence infections in the Midlands area. […]