An Illawarra woman who became the latest victim of the sewing needle saga after finding one in her sweet potato this week says she's relieved no one was hurt by the "dumb" act. Sonya Lloyd bought the vegetable at the Woolworths store on New Lake Entrance Road this week. […] 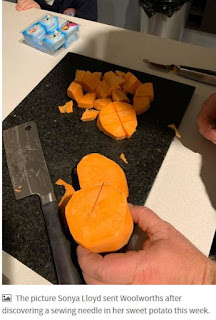 
Jerry Scott & Jim Borgman, Zits, 7 June 2019. The bottomless “great blue hole of Ohio” refers to a pond in Castalia, Ohio, formerly a tourist attraction but closed to the public since 1990. 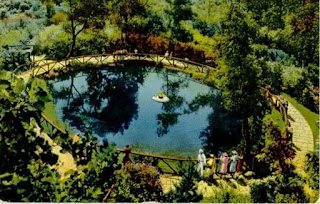 
The stunned deer taken for dead and that revives after being put inside a vehicle is a widespread tale. Are there ursine variants told as true?

In the Three Stooges short film, Idiots Deluxe (Columbia Pictures, 1945), the numbskulls go on a camping trip and end up knocking out a bear. Larry, who believes the bear is dead, says “It’ll make a beautiful rug.” He and Curly put it in the back seat of their car and drive off.  When the bear regains consciousness and bats their noggins, the pair jump out, leaving the animal in control of the car. The bear gives a farewell wave, but it is an inexpert driver – it should have kept both paws on the wheel – and soon crashes the car.