[…] The urban legend of the little boy from Hull who died after choking on a piece of chewing gum was used as a cautionary tale by parents across the city. Now, the true story of the 12-year-old, who died in 1933, has been uncovered – and far from the grim tale that has been bandied around school playgrounds for decades, it tells a tale of a mother's heartache at losing her son. […]

[This is just the latest appearance of Faye Preston’s article on the Hull Daily Mail’s website. It also appeared on 29 March 2018 (“What really happened to Hull’s Bubblegum Boy – and it’s even more tragic than the legend”) and 29 August 2015 (“The tragic truth about Bubblegum Boy – a Hull urban legend”).]

An airport in south China has issued a notice warning passengers not to throw coins at planes for good luck, claiming that the superstitious act would jinx them instead. The advisory was displayed on a screen near the security check area at the Phoenix International Airport in Sanya, Hainan Island around two weeks ago, according to Chinese reports, following a number of recent coin toss incidents at other airports across the country. […] 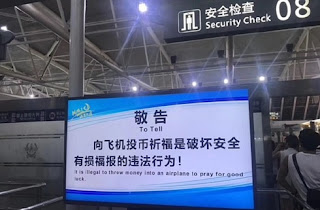 Tanzania: The strange and worrying rise of oil-covered rapists in Kigoma

[…] Sexual violence is a serious problem across the world, but in the last few years, it has taken a particularly strange form in […] Kigoma. In this area, scores of women have similar accounts of rapists breaking into their homes, covered in grease. The first attacks of this kind reportedly occurred around 2014 and have increased ever since. The attackers – known locally as Teleza, which refers to the fact that they cover themselves in oil – typically break into the homes of women in the night. They are often armed and threaten violence, sometimes leaving the survivors with life-threatening injuries. […]

On May 27, 2019, Tanzanian police announced the launch of an operation to investigate and prosecute “teleza” — armed men who have allegedly raped and terrorized women in the Mwanga Kusini Ward of Kigoma in western Tanzania since 2016.  The men reportedly grease their faces and bodies with oil before breaking into female-majority households to rape and rob women throughout the Mwanga Kusini area. Teleza means “slippery” in Swahili and the term has been used to describe these types of attacks. […]

[One would think that being covered in oil would make perpetrating a rape more difficult. Some other oily assailants are the orang minyak of Malaysia and the “grease devil” of Sri Lanka.]