Luigi Barzini, The Europeans (New York: Simon and Schuster, 1983), 75. Luigi Barzini, Jr., was an Italian journalist who “visited Berlin a few times […], just before Hitler came to power.” “The story went around that a male goose of which one cut the neck at the ecstatic moment would give you the most delicious, economical, and time-saving frisson of all, as it allowed you to enjoy sodomy, bestiality, homosexuality, necrophilia, and sadism at one stroke. Gastronomy, too, as one could eat the goose afterward.” 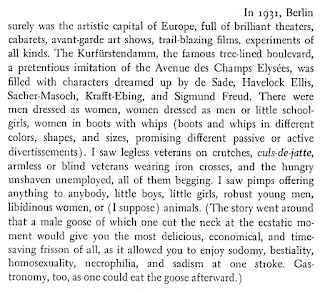 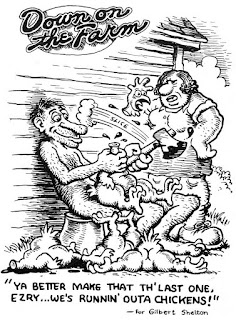 [In 1975 Elton John made some personnel changes to his band, including adding guitarist Caleb Quaye.] I auditioned another American guitarist as well, but it wasn’t a success. For one thing, it didn’t gel musically, and for another he freaked out everyone else in the band by telling us that he liked fucking chickens up the arse, then cutting their heads off. Apparently when you do that their sphincters contract and it makes you come. I couldn’t work out whether he had an absolutely horrendous sense of humour or an absolutely horrendous sex life. There aren’t many rules in rock and roll, but there are some: follow your gut musical instincts, make sure you read the small print before you sign and, if at all possible, try not to form a band with someone who fucks chickens up the arse and decapitates them. Or even talks about it. Whichever it is, it’s going to wear on your nerves after a while if you have to share a hotel room with them.
Posted by Brian Chapman at 12:06 PM
Labels: Cartoons & Comics, Sex