Freddie Starr Ate My Hamster: inside the story that started a fake news revolution

The Oxford Dictionary of Quotations contains one entry under the word ‘hamster’. Nestling among the poetry of Keats, the couplets of Shakespeare and the wit of Johnson, it sticks out like a sore thumb. The entry reads: “‘Freddie Starr ate my hamster’ headline in Sun 13 March 1986.” One of the best known tabloid newspaper headlines of all time, the Freddie Starr-hamster story remains lodged in the public’s consciousness over three decades later. […] 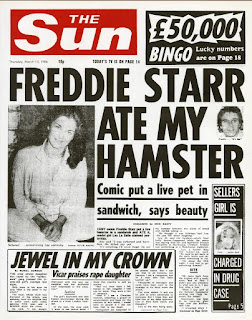 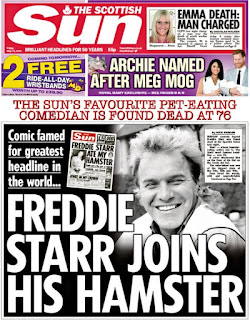 FREDDIE Starr trumped his infamous hamster-eating antics - by DRINKING comedy legend Dick Emery. Madcap Starr quaffed the telly idol's ASHES in a cup of coffee. The bizarre brew came as Starr visited Fay Hillier, who was having a fling with the You Are Awful funnyman at the time of his death. Showgirl Fay kept some of Emery's ashes in a Nescafe jar - but forgot to tell Starr when he made a drink. A friend told The People: "It was a genuine mistake. But when he realised, Freddie made a huge guffaw and said, 'Ooh, I am awful'. […]