“Preview of Death,” Eerie Adventures #1 (Ziff-Davis, Winter, 1951). Sir Melville Duff, alarmed by a presentiment of death, avoids entering an elevator. It then crashes, killing all its occupants. This version of the “Room for One More” legend, with its distinctive motif of a mysterious man seen carrying a coffin on his back, is probably based on the story told by (and later told of) Lord Dufferin, which was popularized by its appearance in Camille Flammarion’s Death and Its Mystery at the Moment of Death (1922). Other versions have been traced back to the late nineteenth century. 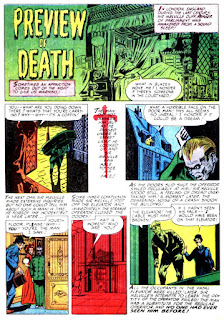 Camille Flammarion, Death and Its Mystery at the Moment of Death, trans. Latrobe Carroll (New York: The Century Co., 1922), 200-1. 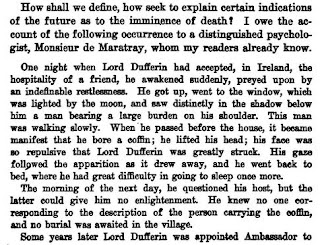 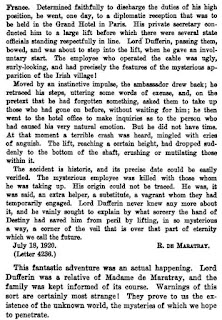 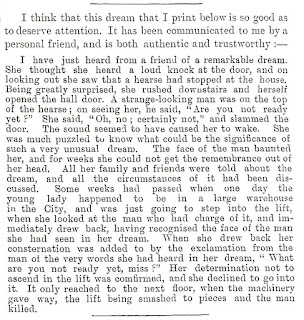 Here is another supernatural legend from the late nineteenth century about a woman avoiding death in an elevator.

Andrew Lang, The Book of Dreams and Ghosts (New York: Longmans, Green, and Co., 1897), 82. “In the same way, in August, 1890, a lady in a Boston hotel in the dusk rang for the lift, walked along the corridor and looked out of a window, started to run to the door of the lift, saw a man in front of it, stopped, and when the lighted lift came up, found that the door was wide open and that, had she run on as she intended, she would have fallen down the well. Here part of her mind may have known that the door was open, and started a ghost (for there was no real man there) to stop her.” 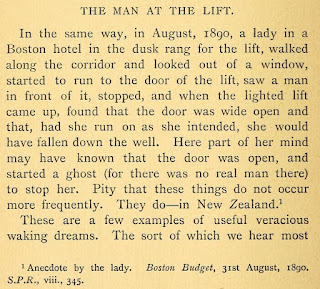