Jonathan Fetter-Vorm, Moonbound: Apollo 11 and the Dream of Spaceflight (New York: Hill and Wang, 2019), 235. “The leaking of the Pentagon Papers and the impeachment charges against President Richard Nixon provoked a growing distrust among Americans toward their own government. All of which helps explain an unlikely legacy of Apollo: the persistent claim that the whole thing was a hoax.” 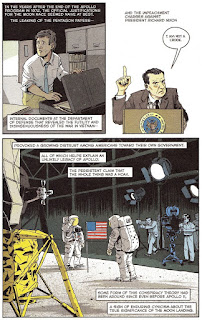 Chinese criminals have been exploiting the country’s African swine fever crisis by intentionally spreading the disease to force farmers to sell their pigs for a low price before smuggling the meat and selling it on as healthy stock, state media has reported. Sometimes the gangs spread rumours about the virus, which is fatal to pigs, but in more extreme cases they are using drones to drop infected items into farms, according to an investigation by the magazine China Comment, which is affiliated to state news agency Xinhua. […]

A Chinese pig farm’s attempt to ward off drones – said to be spreading African swine fever – jammed the navigation systems of a number of planes flying overhead. The farm, in northeastern China, was ordered last month to turn in an unauthorised anti-drone device installed to prevent criminal gangs dropping items infected with the disease, according to online news portal Thepaper.cn. […]