Breaking mews! There's a mystery cat apparently 'driving' a taxi in Joburg, and it's got Twitter talking

Social media users were left amused and bemused this past weekend after a thread on Twitter, claiming a cat was inhabiting the driver of a taxi in the inner city of Johannesburg, went viral. […]

[The City of Joburg’s Twitter account had fun with this rumor while reminding people to renew their driving licences.] 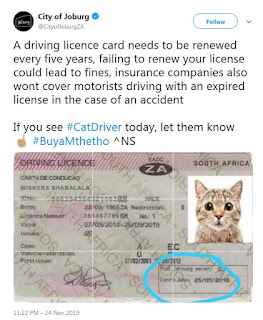 Butterflies are considered to be one of the most beautiful species in the insect family. But can a butterfly also kill humans with its venom? A picture of a butterfly with snake head-like wings is doing the rounds on social media with the claim that its venom has killed 150 people in three days. India Today Anti-Fake News War Room (AFWA) finds this claim baseless. The butterfly in the viral picture is actually a moth, which is not poisonous. […]

=====
Police play with the stereotype of their supposed love of donuts, and as a bonus also mention the five-second rule.

Just moments ago, your BrookhavenPolice officers answered the call each of us fears most. Dozens of donuts fell from a Krispy Kreme delivery truck as it drove along Peachtree Road. BPD rushed to the scene, but to no avail. We found total carnage; donuts scattered along the curb and into gutter- THE GUTTER, people!!! The response time was stellar, but we couldn’t beat the 5 second rule. We are deeply saddened to report that the donuts were a total loss. As you can imagine, this is a very difficult time, and the senseless loss of these delicious pastries has deeply affected all of our officers. We ask that you keep our department in your thoughts and prayers as we mourn this terrible moment. 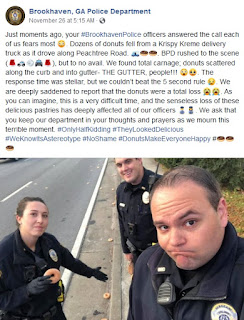