Writing on the wall

SIR – Further to Colonel James Hardy’s letter (August 31), I was at a demonstration of Chinese writing in Hong Kong and the scribe asked what my profession was. Later I was given a plaque, which he told me read: “The world’s best orthodontist”.

It hung proudly on my waiting room wall until a Chinese patient one day said politely: “I cannot possibly tell you what it says but I suggest that you burn it immediately.”

[…] For a long time, anecdotes have connected stressful experiences with the phenomenon of hair graying. Now, for the first time, Harvard University scientists have discovered exactly how the process plays out: stress activates nerves that are part of the fight-or-flight response, which in turn cause permanent damage to pigment-regenerating stem cells in hair follicles. […]

Homes on alert as white circles appear on streets in Plymstock

Mysterious white circles have suddenly appeared on roads around Plymstock - but no-one knows who is responsible or what they mean. Suspicions were raised after a white transit van was clocked by eagle-eyed locals rocking up in the early hours of Monday on Colesdown Hill at the back of Billacombe. A bloke reportedly jumped out and began daubing the road in chalk before driving off. Some suspect travellers with a keen interest in nearby fields may be to blame - although it's not been determined what their reason or motive would be. […] 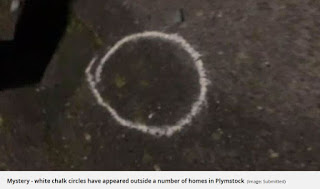 […] Rumours were flying about what the circles meant, with some locals believing their dogs were at risk of being kidnapped while some elderly people thought the markings signified their house had been 'tagged' for a potential burglary. […] A source told Plymouth Live the markings are believed to have been carried out by a local Hashing Harriers running group, with the white circles marking different parts of the route the athletes take - usually between pubs. […]
Posted by Brian Chapman at 1:10 PM
Labels: Burglars' Codes