Plastic rice rumours: No truth in them

Just when news about the entry of poisonous vegetables in Nepal is settling down, rumours of plastic rice are making the rounds of Kathmandu. Since the past few days, social media platforms like Facebook and Twitter have been flooded with rumours about the sale of plastic rice in Kathmandu. And without any proof, tips on distinguishing between real and plastic rice have earned thousands of shares on Facebook. […]

If you flush drugs down the toilet, you could be creating 'meth gators,' police in Tennessee say

(CNN) A Tennessee police department is warning residents to stop flushing drugs down their toilet and sinks out of fear they could create "meth gators." "Now our sewer guys take great pride in releasing water that is cleaner than what is in the creek, but they are not really prepared for meth," according to a Loretto Police Department social media post. "Ducks, Geese, and other fowl frequent our treatment ponds and we shudder to think what one all hyped up on meth would do." […] Police warn that if the drugs make it far enough, they will end up being consumed by gators in Shoal Creek. […]

[…] Loretto Mayor Jesse Turner says the post was clearly meant as a joke, but the humour may have been missed outside the region. "People pay more attention [to police news] when they know there is a little humour. I can't go anywhere without hearing something about meth gators," he says, adding that the town of 1,700 people about 90 miles (145km) south of Nashville are definitely in on the joke. […]

'Wishing trees' at Hill of Tara falling from weight of underwear, handcuffs and other items hung from branches

[…] The so-called “wishing trees” at the Co Meath heritage site are in danger of collapse and the Tara Skryne Preservation group is now appealing to visitors to the Hill of Tara to stop suffocating the trees after one of the hawthorns fell recently. Also called fairy trees, it has been a tradition to place strips of cotton to the trees in the hope of curing an ailment which would disappear as the cloth decayed. But in recent years, visitors have been tying hundreds of items including nappies, plastic cards, bras and even handcuffs to the branches of the trees, which stand near the legendary Lia Fail stone. Coins have also been hammered into the trees, causing fungal diseases to develop in its bark. […] 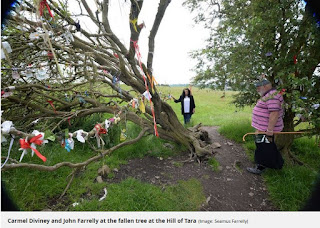 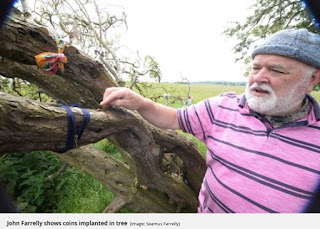