Supposedly, rubbing garlic on bullets to ensure a victim’s death was a Sicilian custom imported to the U.S. by mobsters in the 1920s.  “The Genna Brothers,” Crime and Punishment #63, Sep. 1953, is based on Chicago’s murderous Genna crime family. 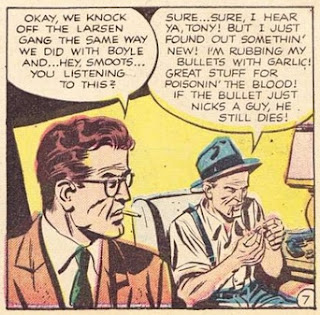 “Charlie Birger, Ruler of the Rackets,” Crime Must Pay the Penalty #4, October 1948. [Charley Birger was a gang leader in Southern Illinois in the 1920s.] 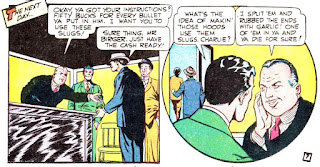 A Soviet woman bought a Chinese carpet and hung it on the wall. At night her son, who was sleeping next door, heard a terrible scream and called the police. They found the woman dead and with a horrified expression frozen on her face. A shrewd policeman turned off the light and everyone saw a terrible image glowing on the new carpet in the dark: Mao Zedong lying in a coffin with his hands folded over his chest, as a candle burned green. According to one popular version the bizarre phenomenon was explained this way:  in order to pay tribute to their leader the Chinese embroidered carpets exported to the USSR with Mao’s image in phosphorescent threads so people would die of fright.

[This contemporary legend comes from Aleksandra Arkhipova and Anna Kirzyuk, Опасные советские вещи Городские легенды и страхи в СССР (Dangerous Soviet Things: Urban Legends and Fears in the USSR), published this year. An interview with them is at https://spokus.eu/en/urban-legends-ussr-soviet-russia/.]

A cult in the campgrounds? Not so, says San Bernardino National Forest

Signs with the U.S. Forest Service logo that warn campers in the San Bernardino Mountains of a “Satanic Cult” that sacrifices animals and of missing people are a hoax. “The is not an official Forest Service sign, and there is no known threats of this type to visitors,” the San Bernardino National Forest says. […] The signs say, in large capital letters, “Unsafe area/visitor assumes all risk.” They go on to say: “Attention campers: Due to Satanic Cult activity in the area, camping is not advised until further notice.” They say pets have been sacrificed in satanic rituals and that several missing-person reports have been filed. […] 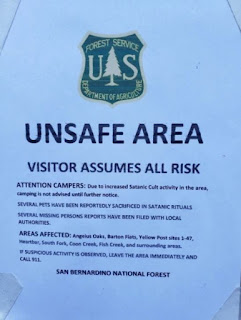