The Nasik [Nashik] rural police have taken to Twitter to inform that a Muslim man, whose video of licking and wiping nose with a bunch of currency notes and calling Coronavirus a punishment by Allah was doing rounds on social media, has now been identified and is in police custody. […]

Lucknow: Two currency notes cause a scare in Mahanagar

Two currency notes of Rs 500 denomination lying on the road scared people in Paper Mill colony on Thursday night. Locals informed the police and later cops seized the currency notes using proper protection due to corona fear. The locals told policemen that these notes were deliberately thrown to spread Sars-Cov-2. […]

Coronavirus scare: Villagers near Aligarh panic after 2 Bikers throw five ₹100 currency notes on the road after spitting on them

On Sunday, two bike-borne miscreants dumped five currency notes of ₹100 near the village of Bijhera in Tehsil Iglas in Aligarh, after they reportedly spit on them. The incident had triggered a state of panic among the villagers who dubbed their action as a deliberate attempt to spread the Wuhan Coronavirus infection. […]

Coronavirus: Two held for spitting on currency notes outside dairy shop in Mohali

Hours after unclaimed currency notes spread panic in a locality, the Indore police are investigating whether it was an act of mischief or someone dropped them accidentally. On Thursday noon, the police were alerted about notes lying on Khatipura road under Heera Nagar Police Station. A police team carefully picked up each of the 25-odd notes and sanitised them. In-charge of Hiranagar Police Station Rajeev Bhadoria admitted that the police did not want to take any chance given the rumours doing the rounds of social media. Rumors stating notes infected with the coronavirus are being deliberately strewn to spread the disease further. The total value of the currency notes was just under Rs 6500. […]

FACT CHECK: Is govt dropping money from helicopters in every town?

[…] In a recent claim, it was said that the government would drop money from helicopters. The claim comes at a sensitive time when the nation is also facing a grappling economic situation arising due to the coronavirus crisis. […]


INDORE: Currency notes found scattered in Khatipura area of Covid-hit Indore gave residents a scare on Thursday. Police confiscated the notes with extreme caution and are examining CCTV footage to identify who left them around and why. Jittery residents claimed that the currency notes were thrown from a car, but police are yet to confirm this. […]

A video showing policemen picking up currency notes lying on the road in Indore is being shared with a communal spin that they were thrown on purpose to spread Coronavirus.  Indore police told BOOM that the currency was not thrown intentionally and has been claimed by a delivery person who said the money had fallen from his pocket while cycling. […]

MYSURU: Is that a banknote lying on the road? Set it on fire! This is what happened at Nazarbad in Mysuru where people panicked after they found a Rs 100 note lying on the road. Fearing that it was infected with the deadly coronavirus, they first poured a sanitiser on it before lighting it up. […]

Surat: Currency notes on footpath give a scare!

SURAT: A couple of currency notes totalling Rs 800 lying on a footpath in Chandi Chowk area of Piplod created a Covid-19 scare in the city on Friday. Some people alleged the currency notes were thrown by a person after he applied his saliva and sweat on them. Police took help of a team of Surat Municipal Corporation (SMC) to collect the notes in a bag meant for biomedical waste. The entire area was sanitized and vegetables from a nearby shop disposed of to prevent any chance of infection. […]

JANAKPURDHAM: One of the two women who had run away throwing money in the streets at Janakpurdham-4, Mahabir Chowk is found coronavirus positive in a rapid test conducted on Saturday. […] According to SP Jaya Raj Sapkota, the spokesperson at the Provincial Police Office, the two had spat on 10, 20 and 100 rupee notes and thrown the money in the streets. […]

On Sunday morning near Dharampur mandi of Dehradun, there was panic among the people after seeing the notes scattered on the road. But there is so much panic among people that Corona did not even go so far to pick them up. Later, the police picked up the money. The incident took place between Dharampur Mandi and the Income Tax Tower. People who came out to buy goods there were seen four notes of five hundred rupees and one hundred rupee notes lying on the road. Someone made a video of the incident and posted it on social media. […]

Mysore/Mysuru: Coins found scattered in Boti Bazaar area of COVID-hit Mysuru gave traders a scare yesterday. Jittery traders claimed that the coins were thrown to spread the killer virus. The situation was, however, diffused by the Police and Mysuru City Corporation (MCC) staff. In normal circumstances, perhaps people would not hesitate to pick up coins strewn on the road. But in times of COVID-19, people may not take the risk of doing that. […]

Yet another shocking incident of currency notes being thrown with a suspected intention to propagate the infection of Wuhan coronavirus has come into notice. The incident took place in village Sarasar of Rajasthan when an unidentified person threw currency notes of Rupees 500 at the residence of one Ghadseiram. Some of the notes were torn. A total amount of thirteen thousand five hundred was thrown at his house. […]

In another incident, currency notes were found on the roadside near a cement factory in the industrial area of Sujangarh, Rajasthan. Factory Director Anand Bagda informed the police about this. After that Sub-inspector, Dilip Singh, and the sanitization team personnel from the Municipal corporation reached the spot. Precautions were taken according to coronavirus protocol. The team sprayed sanitizer all over the area. After that, the police picked up the notes lying on the ground between the road and the factory. […]

A CCTV footage showing a Muslim man in a petrol pump reaching for his pocket to make a payment and dropping something on the ground is massively viral on social media. Certain users have speculated that the man intentionally dropped currency notes to spread coronavirus infection. […] [According to police, the driver had a paralyzed hand, “which is why the notes fell out of his hand.”]

KAITHAL: Panic gripped Kaithal on Saturday after some miscreants threw some currency notes in the denomination of Rs 500 and fled from the spot. […]

What will happen if you drop thousands of rupees in Indian currency on the road? Usually, the money will be gone even before you can say the amount you lost. But, in these times of Covid-19 crisis, the currency notes are only likely to trigger a scare about the spread of the infection and people are unlikely to touch it. That’s exactly what happened in Bihar where the fear of Covid-19 saved Rs 20,500 of one Gajendra Shah, an auto-driver in Kopa village of Saharsa district. […]

BHOPAL: Quite a sensation was created in Harpalpur town of Chattarpur, after currency notes were found scattered there on some road trisections on Saturday. These new Rs 20 denomination notes were later picked up by the cops, who immediately started the investigations. […] A resident informed the police. “I had read in newspapers that in some places where positive cases of coronavirus were found, people were creating mischief by throwing infected currency notes to further spread the virus,” the resident told the cops. By the time cops reached the spot, panic had already gripped the small market place and many shop keepers had pulled down their shutters. […]

Durg -- Unclaimed currency notes lying in Kadambari Nagar area created sensation in locality. The residents soon gave information to their Ward Corporator, who alerted the police, which rushed to the spot and seized the currency notes. Meanwhile, amid the coronavirus outbreak, the currency notes having value under Rs 10,000 created sensation in the area and the residents of the locality were panicked a lot. It remained unknown that whether it was an act of mischief or someone lost the money accidentally. […] 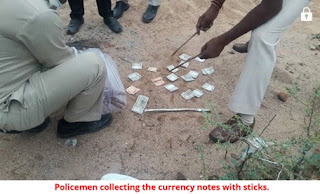