The Hudson River is full of urban myths

We West Side boys used to swim in the Hudson River off Gansevoort Street pier, across the road from what is now the High Line. […] Even then – 60-plus years ago – it was frowned on. What the grown-ups warned us about was not the genuine risk we ran of typhoid. Rather, they regaled us with the story of the boy who dived in the river and got his head stuck in a milk can and drowned. […] If all the boys we were told of who drowned with their heads in milk cans were at the bottom of New York’s rivers there wouldn’t have be much room for the shipwrecks and the gangsters in cement galoshes.

‘Paul Is Dead’: The Bizarre Story of Music’s Most Notorious Conspiracy Theory

[…] It was more than just a rock-star rumor—it inspired ordinary fans to turn into detectives, and permanently changed the way people consume music. “Paul is dead” walked so “Tupac is alive” and “Stevie Wonder can see” and “there are 12 different Avril Lavignes” could run. […]

A woman called the Kalispell Police Department to report a man who had called to tell her, falsely, Paul McCartney is dead. She told the police it was a “threatening phone call,” but she couldn’t explain how the false celebrity gossip was a threat to her. […]

[…] Along a straight stretch of Kuna Mora Road you start to see them. A high heel here, a bottoms-up boot there. But before you know it you're rolling right along side thousands of feet, of what used to be on somebody's feet, now affixed to the top of fence posts. And there's all kinds in this collection. […] As of now, the shoes remain one of those unsolved mysteries. One of the landowners tells us he has removed the shoes from time to time but they have always returned. […] 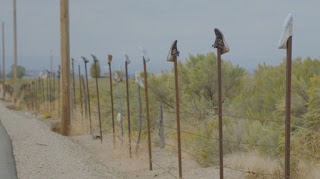