Akemi Johnson, Night in the American Village: Women in the Shadow of the U.S. Military Bases in Okinawa (New York: The New Press, 2019), 69.

[U.S. marines and sailors based in Okinawa, Japan, who intend to marry someone from the island are required to attend a military-run premarital seminar. The author attended one of these two-day seminars in 2009. One of the speakers was a young chaplain.]

“Guys and girls are wired differently,” he explained. “They just work differently.” He showed a PowerPoint slide about it. Men were “Mr. Fix-Its,” wanting to fix everything without asking for help, programmed like that since childhood. Women were “pursuers,” wanting to make a connection with their partners “at all costs.” His message was that men and women were biologically different, leading to inevitable inequalities and conflict.

On screen he showed a cartoon of a woman standing at a bathroom sink, her wet hair obscuring her face. She reached behind her, hand outstretched. The caption read, “Hand me the hairdryer.”

The room rumbled with low male laughter. Horror crawled through me. The man standing behind the women in the cartoon was about to pass her a handgun. 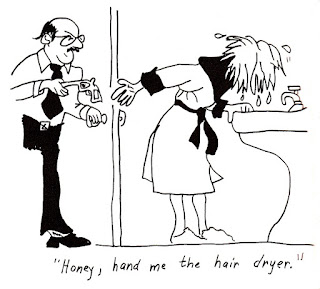